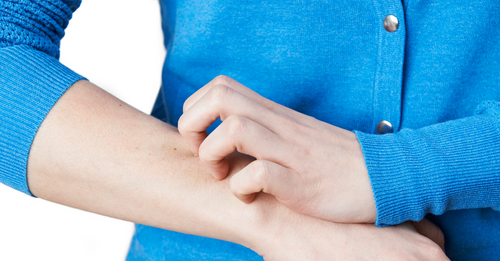 Psoriasis is an immune-mediated disease that causes raised, red, scaly patches to appear on the skin.

Psoriasis typically affects the outside of the elbows, knees or scalp, though it can appear on any location. Some people report that psoriasis is itchy, burns and stings.

How do I get psoriasis?

While scientists do not know what exactly causes psoriasis, we do know that the immune system and genetics play major roles in its development. Usually, something triggers psoriasis to flare. The skin cells in people with psoriasis grow at an abnormally fast rate, which causes the buildup of psoriasis lesions.

Psoriasis often develops between the ages of 15 and 35, but it can develop at any age. About 10 to 15 percent of those with psoriasis get it before age 10. Some infants have psoriasis, although this is considered rare.

Psoriasis is not contagious. It is not something you can "catch" or that others can catch from you. Psoriasis lesions are not infectious.

Are you one of the 24.8 million Americans suffering from moderate to severe psoriasis? Ask us about personalized medications to help with symptoms of psoriasis. Email us here

There have been several case studies done that suggest improvement of psoriasis symptoms using Low Dose Naltrexone, You can read about one of these case studies below.