One of the most overlooked nutrient deficiencies that is seen in patients is magnesium deficiency, and that is a serious problem because your body needs magnesium to accomplish 300 incredibly important biochemical reactions. Magnesium is the fourth most abundant mineral in your body, so if you are deficient – like 50 to 90 percent of us are – then you are probably feeling some symptoms.

There are four main reasons why most of us are low in magnesium:

What are the signs of magnesium deficiency?

Random spasms, cramps, and “charlie horses” in your legs and other places in your body aren’t actually random – they are the most common signs of magnesium deficiency.

Magnesium is essential to the production of thyroid hormones, and I find that magnesium deficiency is one of the often overlooked factors contributing to thyroid problems.

New research found that magnesium supplementation helped improve all the major physiological markers associated with insomnia. One major example: GABA is the calming, restful neurotransmitter, and GABA receptors in the brain require magnesium to work correctly.

Magnesium calms down the excitatory NMDA receptor. Without it, calcium and glutamate activate NMDA, which can lead to depression and anxiety.

As someone who has personally struggled with adrenal fatigue in the past, I can attest to magnesium’s role in calming stress levels and rehabbing hormones. Magnesium helps to regulate cortisol levels, allowing for more balanced hormone production.

Magnesium can also enhance the brain’s ability to change, heal, and grow new neural pathways, which is essential to slowing down and even reversing cognitive decline.

7. Migraines and other types of headaches

Half of the United States gets at least one headache every month, and millions are debilitated by painful migraines. An estimated 50 percent of those suffering migraines are magnesium deficient. Research has found that 60 percent of those with chronic migraines have genetic changes that decrease their body’s ability to metabolize magnesium, which relaxes blood vessels in the brain. Ionized magnesium administered through an IV significantly reduced pain within 15 minutes in more than 80 percent of patients.

Someone has a heart attack every 43 seconds, and one study published in the American Journal of Cardiology found that a lower level of magnesium intake increased the risk of coronary heart disease by 50 to 80 percent. In a different double-blind, placebo-controlled study, people received either magnesium or a placebo for one year. For one month, the magnesium group received 6,000 milligrams of magnesium orotate, and 3,000 milligrams of magnesium orotate for 11 months. Afterwards, only 52 percent of the placebo group was still alive, compared with 76 percent of the magnesium group.

One commonality between just about every chronic health problem is inflammation. Magnesium has been shown to decrease CRP, which is a measure of generalized inflammation.

Studies have found that children who took 200 milligrams of magnesium daily over six months had a significant decrease of hyperactivity symptoms compared to children who didn’t take magnesium.

A shocking 50 percent of America has some form of insulin resistance, from metabolic syndrome to full-blown type 2 diabetes. Research published in the medical journal Circulation showed that among approximately 5,000 people over a period of 15 years, those who took higher levels of magnesium had a decreased risk of metabolic syndrome. A similar study published in the American Journal of Epidemiology observed more than 1,000 healthy adults for five years and found that greater magnesium intake improved insulin sensitivity. Other studies have shown that magnesium improves triglycerides and high blood pressure, two other hallmarks of metabolic syndrome and diabetes.

Magnesium is a key nutrient for producing strong, healthy bones. A randomized controlled study found that 300 milligrams of supplemental magnesium increased bone mineral content when taken for a year. Two American Journal of Clinical Nutrition studies found that the more deficient someone was in magnesium, the lower the bone density was, increasing the risk of osteoporosis and fractures.

Research suggests people who don’t eat enough magnesium-rich foods have a higher rate of asthma. One reason could be that magnesium may facilitate healthy bronchodilation.

It’s difficult to replenish your magnesium entirely through diet, so if you feel like you can’t possibly eat more Swiss chard, or are still deficient, take it to the next level with magnesium supplements.

Supplementing with magnesium is generally safe but can cause diarrhea and GI upset when taking too much for your body, so start at a lower dosage and work your way up, or proceed according to your doctor’s recommendation. 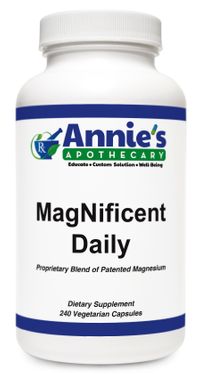 Magnesium Lysinate Glycinate Chelate, a mineral amino acid chelate in which magnesium is bound to two amino acids, creates a complex that is more readily absorbed across the intestinal wall. Since the body can efficiently absorb dipeptides (two amino acids linked together), Albion’s TRAACS® magnesium lysinate glycinate is an excellent delivery system for magnesium. In general, Albion TRAACS patented mineral amino acid chelates are resistant to competitive minerals, do not weaken the action of vitamins, and pose a smaller risk of overdosing.* Di-Magnesium Malate, the other chelate in MagNificent Daily, contains 69% malate (malic acid). Each capsule of MagNificent Daily supplies approximately 400 mg of malic acid. Malic acid was chosen because it forms complexes with magnesium. Magnesium and malate play critical roles in energy production under aerobic conditions or when oxygen is lacking. Malic acid also appears to exert a protective effect by binding aluminum. You can buy Magnificent Daily in store or online at AnniesRx.com/shop-now. Get 10% off Magnificent Daily until June 30, 2019 use promocode MAG10 online.